I figure that before I kick the bucket, I should take the time to set down something of my personal story of how I became one of the early pioneers to study NDEs and, not long after, to co-found IANDS, the International Association for Near-Death Studies. After all, I am one of the few who  was there at the beginning and would like to take you back to those exciting days of high adventure at the outset of my life in NDEland. So, gather round, friends, sit a spell and I will tell you the tale of how it came to pass that I got involved with NDEs and how IANDS was born.

In the summer of 1976, I was mired in the waning and turbulent days of a disastrous marriage, which would soon implode in violence and mayhem, causing me untold anguish as I reeled from the centrifugal winds that blew my marriage and my life to bits. But, fortunately, that’s not the personal history that’s relevant here, though for drama and trauma, it certainly made that year a pivotal one in my life. But a few months earlier, something else happened that would prove to be even more monumental for me, a life-changing event from which I would never recover.

I remember the day it happened. It’s still vivid in my mind. I was sitting outside my house at the time, a few miles down the road from the University of Connecticut. It was summer and the weather was sunny and pleasant. I was reading a book. Hardly anyone had heard of it. Its author was a psychiatrist whose name was unfamiliar to me: Raymond A. Moody, Jr. The book, of course, as you now will have realized, was Life After Life.

As I read it with mounting excitement, and started making furious marginal notes, I remember thinking, “This is it!” I knew immediately and intuitively that I would want to do my own research on what Moody had dubbed “near-death experiences.” Moody was not a scientist (he had actually taught philosophy before turning to medicine), and his book was mainly a collection of anecdotes. But as an academic psychologist, I fancied myself a scientist, and before I had finished the book, the outlines of the research I would soon initiate were already clear in my mind. I was on fire, already thrilled at the prospect of learning more about what it was like to die and live to tell the tale.

It’s funny how sometimes things just slide into place without one’s lifting a finger, so to speak. Because what happened next, just within a day or three, is that several of my students – I had a small coterie of devoted students then – came by and in effect asked me what I was up to these days. “Funny you should ask, “I might have said, but didn’t. But when I told them what I had in mind, they picked up on my enthusiasm and asked if they could get involved. In short order, I had the makings of a research team, which would soon expand to more than a half dozen students, mostly undergraduates.

Meanwhile, I was already hard at work drafting a grant proposal. My plan was to see if I could work with a number of hospitals in the Hartford area and, with their consent, get referrals to patients who had come close to death. I was both surprised and delighted soon to learn that the University Research Foundation approved my proposal and had funded it fully. Surprised because, remember, at that time hardly anyone had heard of NDEs or if they had were not likely to give them any credence. Nevertheless, I was off and running – to Hartford.

Before long, I had made contact with the appropriate administrators and physicians at three hospitals in Hartford (as well as several other potential sources of respondents) and gave my first lecture at Hartford Hospital to discuss NDEs and my proposed research. Again, I was surprised that the response I received was so positive. People came up afterward to say they would be happy to help me. Another door opening for me with my barely touching it. I am no great scholar, God knows, but I do have – or did have – charm in those days, and I think that helped to persuade the powers that be that I would not bring disgrace to their institutions.

Soon I was striding the halls of Hartford Hospital, wearing a while lab coat, as if I were a “real doctor,” on my way to interview patients who were recovering from a serious near-death incident. Of course, I had no idea whether they had had an NDE. All I could know is that they had apparently been close to death. But with my third patient, I hit pay dirt. To this day, I remember her name – Iris Lemov – who had had a close call owing to a severe case of Crohn’s Disease. Iris confided in me that she did experience something unusual when she was very ill and went on to describe a classic Moody-type NDE. I could hardly conceal my excitement.  I was finding exactly what Moody had reported in his book, Life After Life.

Originally, I had thought I would train my students, especially my graduate students, to conduct most of these interviews, but after doing a few of them myself, I decided that I wanted to do as many as possible. In the end, I wound up interviewing about three-quarters of my sample of 102 persons who had come close to death.

Now, here’s another door that opened for me when all I had to do was to approach it. Years of subsequent research have shown that only a small percentage – usually around 15%  — of persons who come close to death and survive report an NDE afterward. But in my study, which I described at length in my first NDE book, Life at Death, I found that almost half of my patients (or former patients) recounted an NDE. So I had gobs of data, and without going into detail here, what I found fully confirmed and extended Moody’s original anecdotal findings. Life at Death is now regarded as the first rigorous scientific study of NDEs.

Most of the people I eventually interviewed were no longer hospitalized, however. Instead, I would bomb around the state of Connecticut in my trusty Dodge Dart to conduct my interviews and then play the tape on the way home. I can’t begin to describe the profound emotions I felt doing these interviews as people recounted, not infrequently with tears streaming down their faces, what they had experienced when close to death. Often, I was the first person to hear their story. There was usually a feeling of a sacred encounter taking place between us as people shared with me what they claimed to be the most important thing that had ever happened to them. I felt both privileged and blessed to be entrusted with the story of their most treasured, if sometimes perplexing, near-death episode.

After spending thirteen months tracking down and interviewing my respondents, one day I was sitting outside on the back deck of the house where I was then living, working at a picnic table, tabulating and analyzing my data. And with paper and pencil, if you can believe it. Remember, this was in the late 1970s at a time before computers were common, and when there was no Internet and when no one had ever heard of a cell phone. We were still in the typewriter age then.

But I remember that day because my then girlfriend Norma came over, and I still recall what I said to her when I looked up from my data sheets. “No one is going to believe this, Norma. I am sitting on dynamite!” I already knew that I had struck a vein of gold.

Not long afterward, one evening in 1977, I was in my kitchen, stirring some cream sauce, when the phone rang. Still stirring the pot, I reached across for the phone and heard an unfamiliar voice on the line speaking with a southern accent.

“Hello, Ken? This is Raymond Moody.”

I stopped stirring my cream sauce.

Raymond wanted to invite me to Charlottesville, Virginia, where he then lived. Several researchers of whom he had heard were following up on his work, and someone had drawn his attention to me. That someone – a sociologist colleague of Moody’s named John Audette – would soon be in touch about the arrangements, but meanwhile Raymond was hoping I could come down.

On November 19, 1977, one of my research associates, Sue Palmer, who had been of inestimable help to me in carrying out my original research, and I loaded up my car and headed down to Virginia where I would meet not only Raymond, but several other professionals who would come to play key pioneering roles in the development of the field of near-death studies – in particular, Bruce Greyson, Michael Sabom and John Audette, all of whom were to become close colleagues of mine. Everything of importance really began from that first meeting. And one of the most significant decisions to come out of that meeting was the intention to form some kind of professional association to promote the scientific study of NDEs.

Some months later, in August, 1978, Greyson, Sabom, Audette and I met at a conference where we established an organization to further the professional study of NDEs, which Audette headed for a couple of years. We gave it a stuffy, high-flalutin academic name: The Association for the Scientific Study of Near-Death Phenomena. The reason for doing this was to try to interest other professionals and academics in the study of NDEs.

Here’s what we looked like at that time. The bespectacled guy in a suit on the left is me; above me is John Audette. Next to him is Bruce Greyson and then Mike Sabom. We had a dream…. 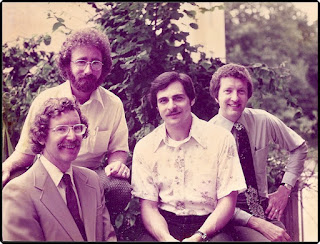 Part 2 will be published next week!