I am – or perhaps I should say, I was – a retired NDE researcher. I began my work interviewing NDErs in 1977 and eventually published my first book, Life at Death, describing my findings in 1980. I continued my research, lecturing and writing on NDEs until about the time I reached the age of sixty-five around the turn of the millennium. At that point, having authored four more books on NDEs and countless articles on the subject, I accepted a figurative golden handshake for my labors and, having by then returned to my native California, decided to devote myself life out in the pastures. I figured there were other things I wanted to do, apart from loafing, than continuing to prattle on about NDEs. I was tired of being interviewed by breathless TV hosts who would always be asking me the same questions, such as, “So, Dr. Ring, what is it like to die?” One time, in bored exasperation, I simply slid off my chair. At least that got a laugh.

Anyway, at that point I disconnected as much as possible from my life as an NDE researcher, declined all interviews or invitations to speak at conferences, and began to explore and write about other things that interested me. Some books on classical music, one on the lives of contemporary Palestinians, various memoirs, books of essays, and in the last few years, I took up the blogging life. But eventually since I never was entirely able to distance myself fully from NDEs, I was lured back to the field, at least to the extent of renewing my contact with various NDE researchers and came to know new people who were now devoting their lives to researching and writing about NDEs. Still, I was happy to remain on the sidelines. It’s sort of like being a grandfather. One gets all of the pleasures of seeing what others are doing without any of the responsibilities to do anything oneself. After all, when you’re in your mid-80s, what the hell can you do besides watching tennis and yearning for the promised life to come – at least if you take the implications of NDEs seriously, which I do.

But recently, at loose ends, and wondering what I should do next with what remains of my life, I got an idea. Since I now know and think highly of a number of NDE researchers, some of whom are relatively new contributors to near-death studies, I thought I might be able to perform a service by introducing some of them to you in these blogs. So I have suddenly become a soi-disant NDE researcher booster. In this blog, and perhaps in a few to come, if the good Lord grants me more time on this benighted planet, I would like to introduce you to some of these friends of mine and their works.

But I’ll begin with someone who hardly needs an introduction, really, since I suspect many of you are already familiar with his name: Dr. Bruce Greyson, a psychiatrist, who for many years has been on the faculty of the University of Virginia. Even if you’re not familiar with Bruce’s work, if you read my previous blog about my early life as an NDE researcher, you may remember seeing a photograph of him and me together, locked in a brotherly embrace, because Bruce has been like a brother of mine for many years. He was a part of the original “gang of four” who helped to established IANDS – The International Association for Near-Death Studies – back in 1981, and not long afterward he assumed the editorship of its flagship journal, The Journal of Near-Death Studies, which he edited for the next quarter of a century. In a recent tribute to him, which I wrote on the occasion of a book launch for his long anticipated personal account of his work as a NDE researcher, I expressed my own view of how I had come to regard Bruce:

If any of you have ever edited a journal, you know what a selfless and time-consuming task it is. You had to be willing to sacrifice your own career in order to enable other professionals to publish their own works. That’s the kind of person Bruce was and is. Totally dedicated. And while all of us in that original group eventually moved away from involvement with IANDS, only Bruce has remained faithful to it to this day. In my opinion, no one has done more to bring professional recognition to the field of near-death studies than Bruce. I have long held the view that his contributions to the field over more than forty years – his editorship of The Journal of Near-Death Studies, his many excellent and important research studies, the books he has co-edited containing his own articles, all the public lectures he has given, his service to NDErs as a master therapist, and so much more – mean that Bruce is without doubt the most important and influential professional in NDE studies.

His book, which I alluded to, which was published just last year, is what I really want to call to your attention. In my opinion, it is must reading for anyone interested in NDEs. It is simply called After: A Doctor Explores What Near-Death Experiences Reveal about Life and Beyond. And since I have appointed myself a kind NDE researcher booster, I will permit myself to quote my own blurb for the book in order to invite you to get ahold of a copy: 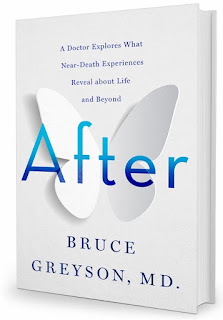 In After, psychiatrist Bruce Greyson tells the story of his personal and professional journey from a skeptical scientist to his becoming the most distinguished and important authority of near-death experiences (NDEs) in the field. Drawing on his treasury of forty-five years of research, and studding his account with fascinating cases, Greyson provides an always engrossing and illuminating survey of the basic findings and implications of NDE studies for the general reader. In his book, he shows us why he is regarded as the leading expert to put NDE studies on the map and establish it as a legitimate scientific enterprise. Moreover, he is not afraid to share his insights on spiritual issues that NDE research affords, including the possibility that death isn’t a dead end. Both inspiring and deeply personal, this is a book to savor and the culmination and capstone of Greyson’s outstanding career.