As we announced last week, we will be debuting our brand new website makeover later this year! We’ll have wonderful new content as well as a lot of exciting projects in the works to continue to bring you the best of the science of near-death experiences, as well as personal stories, insights from experts around the world, fascinating interviews, and more.

We’re excited to share more video clips from the new interview series we’ll be debuting after our upcoming relaunch. We’re proud to present a preview from the second of an upcoming series of interviews on our new site with some of the most exciting writers and researchers working today.

Here are a few brief excerpts from Lisa Smartt and Paul Perry’s interview with Jeremy Narby. He talks about his experiences with Ayahuasca, which he first consumed during his anthropological research in the Amazon many years ago, as well as knowledge indigenous people say they gained through its use, our understanding of the world, the discoveries still awaiting us in the realm of the mind, and much more.

He explores these concepts in his classic book The Cosmic Serpent: DNA and the Origins of Knowledge, as well as his most recent work: Plant Teachers: Ayahuasca, Tobacco, and the Pursuit of Knowledge.

Editor’s Note: Ayahuasca is both a powerful and potentially dangerous psychedelic as well as a controlled substance in the United States and other parts of the world. Life After Life does not advocate for its use and takes seriously the dangers associated with use of any drugs or hallucinogens. However, because of the interest and potential insight it may offer into consciousness and our understanding of the mind, our lives and spirit, we are happy to share this interview with you.

In this clip Jeremy explains what the Ayahuasca experience is like and how it changes your perspective.

Jeremy Narby on how little we know about the interaction of biological processes and experience of consciousness they create.

Jeremy Narby discusses Benny Sharon’s concept of what Ayahuasca reveals about the brain with Paul Perry and Lisa Smartt.

Below, learn more about Jeremy’s book Plant Teachers: Ayahuasca, Tobacco, and the Pursuit of Knowledge. 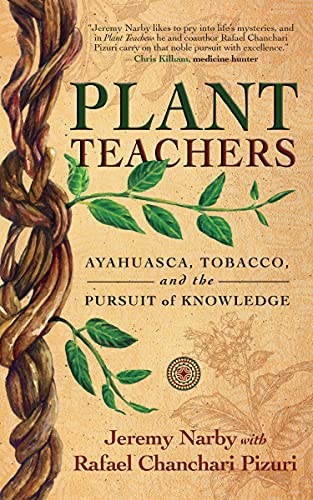 “The dose makes the poison,” says an old adage, reminding us that all substances have the potential to heal or to harm, depending on their use.

This is especially true of tobacco, says Plant Teachers: Ayahuasca, Tobacco, and the Pursuit of Knowledge, in which anthropologist and bestselling author Jeremy Narby joins with indigenous elder Rafael Chanchari Pizuri to hold a cross-cultural dialogue that explores the similarities between ayahuasca and tobacco, the role of these plants in indigenous cultures, and the hidden truths they reveal about nature.

Narby first learned of the shamanic uses of ayahuasca and tobacco while conducting fieldwork in the Amazon region decades ago. After witnessing the transformative power of these mind- altering plants, he embarked on a quest to understand their effects on human consciousness. This search led him to request two interviews with Chanchari, about the proper way of approaching these powerful plant teachers.

Chanchari readily agreed to share his knowledge and their first in-person meeting focused on tobacco, which he says is, “an important medicinal plant that’s deeper meaning depends on how one uses it.” Their ensuing conversation, which Narby audio-recorded in Spanish, and translated it into English, is the focus of Chapter 1 of the book.

After that initial meeting, Narby delved deeply into the recent science about tobacco. “My goal in bringing science into the discussion was not to validate or invalidate Amazonian knowledge but to juxtapose the two points of view and see how they lined up next to each other. I charted my inquiry into the scientific literature on the different points made by Chanchari — and, to my astonishment, found considerable correspondences between indigenous knowledge and contemporary science.” This is the subject of Chapter 2.

Almost a year after their initial dialogue, Narby suggested that they follow the same procedure and turn their attention to another psychoactive plant from South America, the ayahuasca vine, which some consider to be a potential remedy for depression, trauma, anxiety, and addictive behaviors and a tool for personal exploration and growth (and which others view as a dangerous hallucinogen). That conversation is the subject of Chapter 3.

As he had with tobacco, Narby researched the recent scientific literature on ayahuasca, guided by Chanchari’s understanding, and found that the Amazonian point of view helped him make sense of a new domain of scientific research, which is the subject of chapter 4.

“As coauthors, we both view science and indigenous knowledge as complementing each other, despite certain differences,” writes Narby. “By bringing them together, our first goal is to allow them to exist side by side. In this way, readers may consider both and draw their own conclusions,” writes Narby. “This book has two authors, deals with two plants, and brings together two systems of knowledge. We hope you enjoy it.”

Jeremy Narby, PhD is the author of many books including Plant Teachers, The Cosmic Serpent, and Intelligence in Nature. Jeremy became an early pioneer of Ayahuasca research while living with the Ashaninca people of the Peruvian Amazon in the 1980s. He studied anthropology at Stanford University and now lives in Switzerland and works as Amazonian projects director for Nouvelle Planète, a nonprofit organization that promotes the economic and cultural empowerment of indigenous peoples.